Gem inclusions are often thought of as undesirable things. However, inclusions can offer many advantages, including helping us to know the origin of a stone – or whether it’s been adulterated by heat or chemicals.

However, gem inclusions are natural features that are part of the unique character and appearance of a gemstone. And, such unique features – like Cindy Crawford’s mole or Madonna’s tooth-gap – can at times enhance rather than detract from a gem’s beauty.

So, in searching for an exciting gem rough to cut, artists will often seek-out the proverbial mole or tooth-gap gem inclusions, and will design the cutting strategy to highlight rather than hide the unique features. This page is about two such stones – one is a Rutilated Quartz and the other an Oregon Sunstone.

Some people are familiar with the idea of isolating a needle-shaped inclusion in the center of a gemstone, to produce a reflection pattern that faces-up like spokes in a wheel. The process used to accomplish this is outlined on my process page.

The quartz on this page has a uniquely sword-shaped inclusion of Rutile. The inclusion is not only flat and blade-like, it is also two-toned, with a black center and golden edges. The optics of the stone reflect various views of the blade to form spokes: Despite the optical illusion of twelve needles,
there is of course only a single inclusion, perfectly centered within the stone: 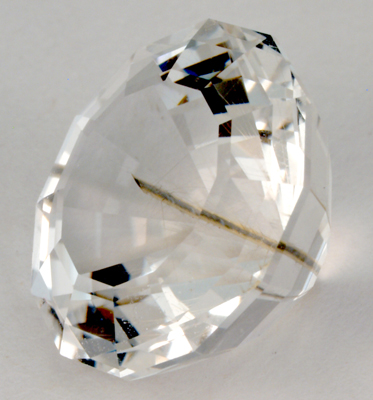 People frequently ask me how I “put the needle in there” without breaking the stone. The answer is that I didn’t put it there – Nature did. The needle was in the rough and I cut the gem around the needle. And, yes, that’s tricky to do…

The illusion is created by the path of light within the stone. As the eye looks straight downward, the view is reflected by the pavilion faces, so each set of facets around the stone shows a lateral view of the inclusion. This sideways image shows the sword edge on: 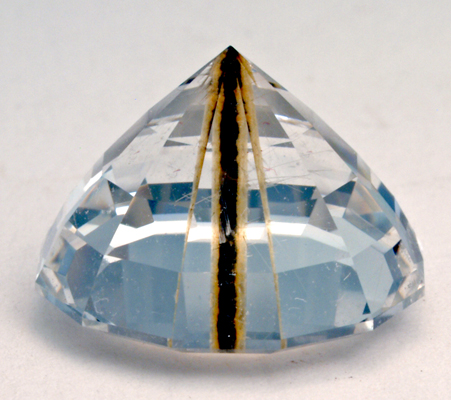 Here’s an angle that shows the sword protruding from the culet to the center of the table, as well as some of the illusory reflections all around. And, a repeat view of the face-up illusion shows the tiny hair-like Rutile protrusions from the center sword. The geometry of this stone is very simple. It’s a simple step-cut with 12 sides. There are four steps on the pavilion and three steps on the crown. The step-count and angles are not critical – that’s just what fit the rough. Here’s another example of this same tricky orientation of inclusions and use of gem optics. This photo of an Oregon Sunstone shows approximate mirror-images of schiller reflections in the left and right sides of the gem. Contrary to appearances, the Schiller is neither on the left side nor the right side of the stone. It is instead oriented vertically from the table down toward the keel of the gem.

In this second image of the same stone with different lighting, the table-edge of the schiller is visible as pale, almost-vertical lines on the table. (easier to see in the high-res image)

From those locations, the schiller extends at a slightly-rising angle into the stone – hence the upward rake of the reflections on the pavilion faces, creating a pattern suggestive of mountains.

If you have any questions or comments about the “Sword in the Stone” or about design or orientation of colored stones, feel free to e-mail me.