Determinative identification skills may take many years to develop, and may involve the use of an array of expensive equipment for measuring everything from density to various optical properties or even thermal conductance.

Confirmative identification of gems is much easier to learn and may often be accomplished without any tools at all other than your eyes.

One of the most common identification problems is that of the red faceted stone. We are often reasonably sure that the stone is either a garnet or a corundum (ruby). Sometimes, the owner of the stone declares that they “know it is a real ruby because Grandma gave it to me”.

There are a variety of tools and methods that one may use to separate garnets from corundums from red spinel from red zircon. For now, we’ll just look at separating garnets from rubies.

The method I’m going to share is a fast and dirty version of something called the Hodgkinson method of gem identification – after Alan Hodgkinson. All you need are your eyes and some clean hands.

Pick up a stone in question and hold it up very close to your eye so that you can look into the table. You must hold it very close without touching – almost like inserting a contact lens, but again not touching. Look literally through the stone at a distant source of light such as a lamp or light bulb. You will see a number of reflections of the distant light source as they bounce around within the stone.

Roll the stone around its axis and tilt it slightly while watching the reflections. Due to the refractive properties of gemstones, each reflection will to some extent appear as a small rainbow. This is a single one of those rainbows as it appears looking through a spinel at the filament of a clear light bulb about 6 feet away: 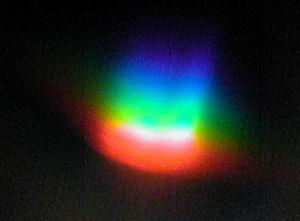 Depending on the gem material in question, that rainbow will have varying properties. If the gem is doubly refractive you are likely to see doubled or ghosted (rainbow) images. Because the gem may be cut in any orientation with respect to the crystal structure (which is responsible for these phenomenon) you may have to examine the stone from a variety of angles to be sure whether it is doubly refractive OR NOT.

To separate rubies from garnets we are going to look at four primary features of these little rainbows: birefringence, dispersion, b/d ratio, and spectral absorption. Although those things sound technical, you will see that they translate to a simple picture of what rubies and garnets look like from the unique perspective from which we have chosen to examine them.

Dispersion is the degree to which the particular gem material splits the spectrum, or how wide does it spread the spectrum – how wide are the bands of color in the rainbow? (the distance between A and B in the photo is the width of one rainbow).

The b/d ratio is the ratio of birefringence to dispersion. If the distance between A and B is 1 unit of measure, then the b/d ratio shown in this photo is above 1:1 or about 1.3. The spectrums are separated by just more than the width of a single rainbow. When you measure this quality of a stone, always roll it about and mentally gauge the MAXIMUM b/d ratio that you can find in the stone.

Zircon actually has a b/d ratio of 1.5, but I could not manage a photo of the max. The above photo showing about 1.3 and such high dispersion should be sufficient for you to recognize Zircon when you see it again. No other gem looks exactly like this.

Now, let’s look at the ruby. Never mind whether you understand the technical stuff or not – just look at the photo. And, hopefully, look at a ruby that you happen to have handy. Lab rubies are cheap and work just fine for a reference. 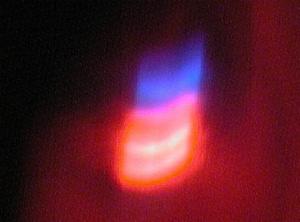 If this is a pair of “rainbows” or split spectrums, where are the green and yellow bands of color?

This is one of the Primary indicators that this is a corundum because ruby absorbs most of the yellow and green portions of the spectrum. This image is a mugshot photo for ruby. No other gemstone looks exactly like this. Once you have seen it for yourself you should be able to instantly recognize any faceted ruby. 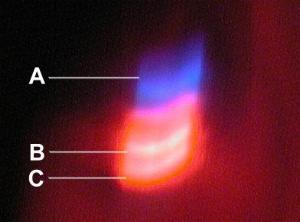 Put down your ruby and hold a faceted garnet close to your eye just as you did the ruby. Focus your attention on a single reflected rainbow image: 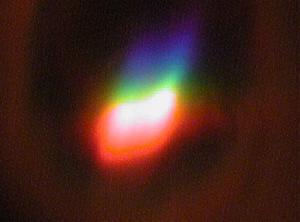 Notice that there is no “ghosting” or doubling of images? Also, notice that nice green band and maybe a thin yellow band? This “signature” image does not prove this is definitely a garnet but it is certain that this is NOT a ruby. (You can actually tell whether a garnet is more pyrope or almandine by the absorption you observe here. Our example is more almandine than pyrope.)

That’s one fast and easy way to separate garnets from rubies without any expensive instruments. You don’t need to remember any of the technical stuff if you just remember what the photos look like and practice with a couple of sample stones. Once you have seen it you’ll always be able to tell the differnece instantly.

I hope you had fun with this page and that it sparked your interest. When I first experienced this way of looking at gemstones it opened a whole new world of appreciation and study for these tiny miracles that most people take for granted.