This is our brief review of Tucson 2007. In addition to review information on the show, this page includes consumer information. Please enjoy anything you find useful or interesting. 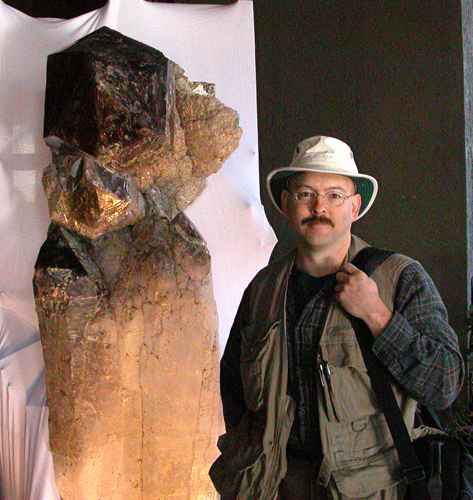 How’s this for a crystal?

Nobody can see it all in the time the shows run, especially if they’re shopping, too. So, this report is just my perspective based on my tastes and my activities and experiences. Your mileage may vary, and I recommend reading whatever else you can find on Tucson. Even Humpty Dumpty may have something useful to say.

The weather in Tucson was a mix of sun and rain, and was a bit chilly. Always be prepared for anything from rain to chill to sunburn. This year, the layered clothing strategy, which included windbreakers and a wide-brimmed hat was as useful for staying warm and dry as it was for preventing sunburn. 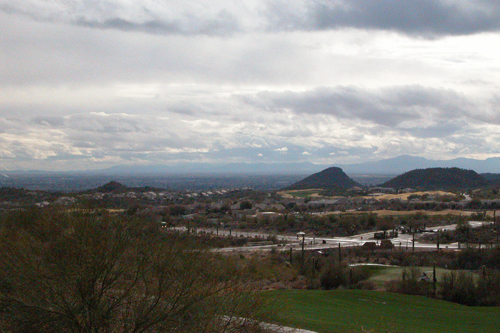 This was the view from outside GLDA, looking toward Tucson

The crowd was much thinner this year, and some venues, like the Clarion, were d-e-a-d. I imagine those who use the end-of-show strategy for bargain-hunting will do very well this time out. I don’t know if the slow-down was caused by oil, or weather, or travel hassles, or the hugely inflated cost of accommodations, or the now-notorious attitude issues, or the spiraling rough prices – or some combination of those things, but the drop in interest was definitely apparent.

I had the privilege to visit with several other professional cutters this trip, and to exchange ideas on everything from cutting to marketing strategies. That was a real pleasure – THANKS to those persons who visited with us. It was a real pleasure that I hope we repeat sometime.

Most of the wholesale venues have gotten their act much more together with respect to credentialing, so that saved time and aggravation. Still, it would be an improvement for them to all collectively contract a single data-processing company to handle show-wide credentials. They’d all save money and more importantly their customers would be happier and spending more time (and therefore money) on the show floor. Some smart IT company should aggressively pursue the opportunity and sell the venues on it.

Again, we witnessed repeatedly the simple fiscal wisdom of waiting one’s turn, being patient and polite to vendors as well as other patrons. Almost universally, such strategies paid-off in opportunities to see “the good stuff” that isn’t always in plain sight – and in easier negotiations. And, this show, more than ever had the “good stuff” out of sight…

I remember one buyer haranguing a poor dealer within an inch of his sanity – loudly criticizing his wares and prices. I do not recommend this strategy! 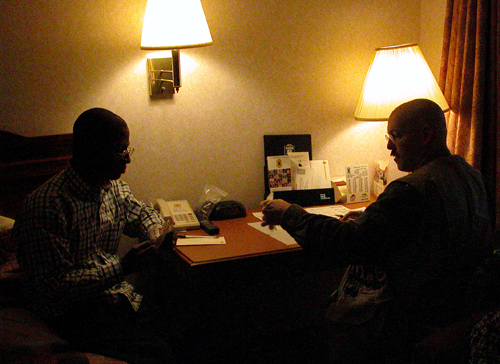 You won’t get into deals like this pleasant and productive visit
with my new friend from Nigeriaby acting “the Ugly American”.

“Hotel row”: (Pueblo/River Park, La Quinta, Howard Johnson, Rapa River & Days Inn)
had some additional parking available this year, and along with the lighter crowd, that worked-out really well. We always found a spot, even in mid-day.

The shows on “hotel row” were reasonable, but we had to search for material that was worth cutting, let alone buying to cut. Some buyers took to simply asking every vendor if they had rough because it was often kept out-of-sight, and much was of bad quality.

The Executive Inn has grown, adding some outside vendors, and collecting some new ones of interest, including some more of our old friends.

The Clarion, as I mentioned, was dead. I don’t know if this was due to a lack of promotion, bad parking, boondock location, or a generally slow crowd.

Electric Park has grown even more and added an RV-camp-style area. It had more material and vendors, including our friends from Washington and a good assortment of Oregon Sunstone.

The G&LW show was again very good, and their credentialing process much easier. They had a huge new parking lot and their usual coordination with Holidome – with extra portable conveniences and shuttle rides gets them my vote for best run and most buyer-friendly. I returned to one particular vendor there and literally cleaned them out of the specific item that I buy from them.

AGTA, the centerpiece, had displays, seminars, and educational as well as jewelry and equipment vendors. Their credentialing was also better this year, and their design pavilion was great fun. The tool show downstairs was better than years-past and I spent more time there than anticipated. I’ll budget more time for this show on my next visit.

We ordinarily skip GLDA, but our “tourist day” got rained-out and we went there instead. The on-site parking was available, and their shuttles were running continuously. The venue is spectacular, and I’d love to go there for a vacation when the show isn’t running. The staff was great and helpful, and the show had some interesting things to see, including this seemingly-lost Roadrunner: 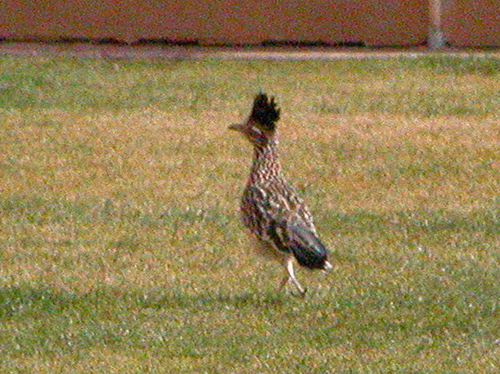 GJX was about the same, and again, other than a few things it was just more visual overload. It’s not really on my “must see” list anymore.

The Radisson was runner-up for the rude staff award, and they moved their credentialing into the bowels of the facility where the process became even less convenient. There wasn’t a single vendor of interest at this location this time, and they’re likely to drop from my list of “worth the time” based on my particular interests.

The Holidome was about the same as usual, and there were some few deals to be discovered, but this one is also falling from the “to-do” list.

JOGS won first prize for rude staff and time-wasting obnoxious credentialing process – and lost our attendance for this reason. Vendors there may want to communicate to show organizers…

The market was rougher even than last year, though some great deals were still to be found. I recognized some specific stones from as long as four years ago. Funny that a person can remember such things. Most of the material offered was of lower-grade color, lower-grade clarity, and smaller sizes – and was more expensive than in the past.
Shopping was WORK to find things worth the investment. 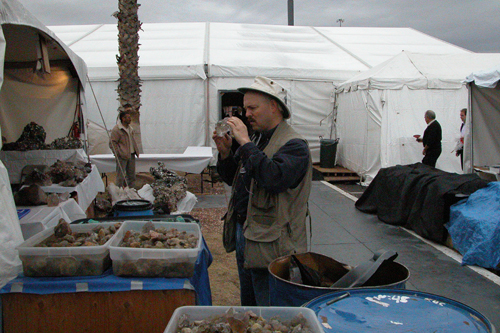 Checking a large rough in the outdoor market

The best deals I saw involved investing hours of time to high-grade the junk and cab-grade bins for the occasional facet-grade piece or part-of-a-piece. Lots of commercial and hobby-grade material was found this way by those who put in the time.

If you’re going to shop at Tucson, have your gemological ducks in a row, and keep some experienced friends handy, too.
Bring the tools you need to be confident about your purchase.

Be careful who you trust, and make your decisions based on the rocks, not the trust: Some people I had called friends for many years tried to set me up…

Here’s another wonderful example involving a $150,000.00 parcel of Emerald. 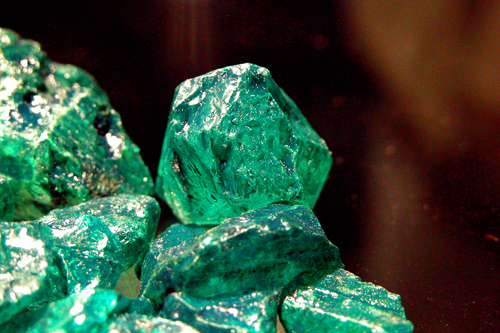 Here’s just part of this beautiful parcel of natural stones,purportedly from Zambia. 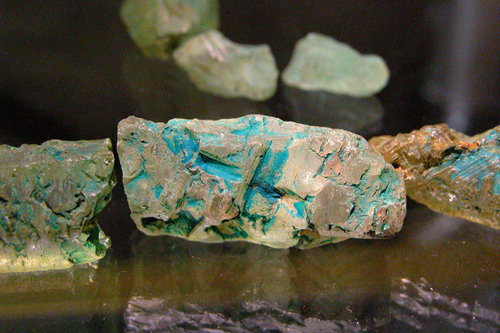 This is another part of the same parcel – after washing in Acetone for a few minutes. Note the dye still visible in the natural etchings in the stone surface. They used low-grade Heliodor as the foundation for a dye-job. 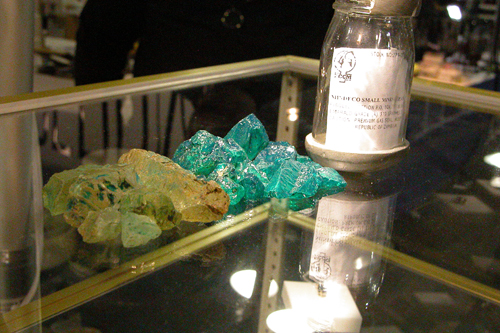 Here are two halves of the parcel side-by-side with the sealed jar the scammers used to try to keep the intended target of this scam from examining the stones too carefully. Fortunately for him, he wasn’t a novice, and wasn’t taken. Now, he has a nice educational souvenir to share with others. Thanks, Jerry, for your generosity with this and for your help on the Sapphire as well.

City of Tucson and show promoters were again doing a great job, and I don’t know where the City of Tucson gets their Police training program, but I wish they’d share it with other departments around the country. TPD gets serious atta-cop kudos for their polite and professional work at these bustling venues!

You are still responsible for you, and I recommend managing both negotiable funds and purchases carefully. Most decent hotels have in-room safes, and safety deposit box rental is cheap insurance.

Be sensible about selecting your accommodations, your travel, and your parking. Be alert about where you are going and what you are doing. Pay some attention to how you may appear to others, and when you leave the show venue REMOVE the badge that advertises “Gem Buyer”…

That’s all for this year – Feel free to write with any questions or suggestions that you may have. Maybe we’ll see you there next year…