This is our brief review of the Tucson Gem Show 2006 – both the show and our trip to the area. In addition to review information on the show, this page includes consumer information, as well as some tourist and rock hounding stuff. Please enjoy anything you find useful or interesting.

Tucson is an elephant – Nobody can see it all in the time the show runs, especially with venues multiplying every year. I don’t intend for this tiny page to be a global source of information. I recommend you read every review you can to see what I may have missed or left out of this. 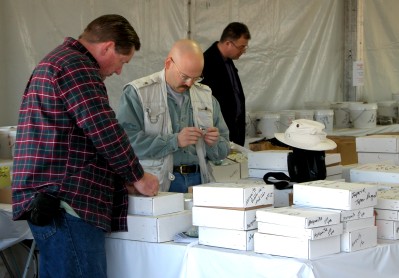 Searching parcels of rough with my friend, Lorin.

The weather in Tucson was beautiful this year during our days there – Sunny, and very pleasant for walking and shopping. But, if you come here, always be prepared for anything from rain to chill to sunburn… 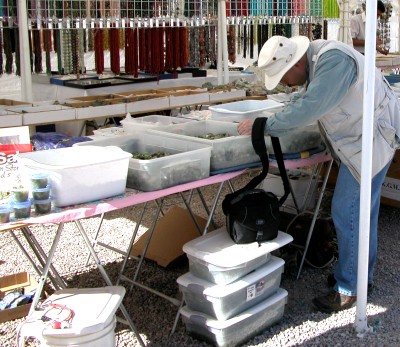 High-grading Bins of Peridot in the sun made for a fun afternoon.

Make them early; make them detailed; study the guide! Accommodations were more expensive and harder to find in respectable quarters this year, and I recommend being early planning for next time around.

There were a number of new venues this year, allowing a host of new dealers and a growing variety of offerings. Some shows were billed in the show guide as being oriented primarily toward specific interests, such as beads. However, even those shows offered some “out of place” vendors with materials of interest to us. I needed even more shopping time this year than I did last year, and we had to move faster than was fun much of the time. I’ll have to schedule yet more time for the 2007 show.

Some of the new venues this year contributed to “show sprawl”, and required traveling cross-town. With GLDA’s move to the west and other shows like Smuggler’s Inn and Clarion popping up on the east end, you need to allow even more time for more shows and more travel between them. We joked several times about donning roller-skates!

Traffic was more intense than in the past, and the advantage of driving is diminishing in favor of
the many show shuttles that are running. Compliments to the Riverpark (Pueblo) for the outgoing shuttle drivers who solicited us for rides to that show – Very nice indeed.

I now recommend taking at least 8 days if you want to shop, and at that you should have your shopping carefully scheduled and be well acquainted with the guide.

An old shooting instructor of mine used to say “Move fast, shoot slow” – meaning to get to your location quickly and then do to business carefully while there. This idea is valuable at Tucson, and a disappointing increase in the number of vendors peddling junk and trinkets – flea-market-type things – has reduced the signal-to-noise ratio at the same time the show has sprawled.

Remember, though, in the rush to do business, one wants to preserve the polite enjoyment of friends from far-away places by “dealing slowly” and politely. Some of our friends travel 40 hours by airplane and endure intrusive searches by customs officials in multiple countries just to get to the market. We are grateful for their company and stories of their year as well as for their goods and amenability to bargaining. Time is always too short, and we must pay attention to niceties: Plan your trip and activities so you can really enjoy the show rather than just brutalizing it.

Again, we witnessed repeatedly the simple fiscal wisdom of waiting one’s turn, being patient and polite to vendors as well as other patrons. Almost universally, such strategies paid-off in opportunities to see “the good stuff” that isn’t always in plain sight – and in easier negotiations.

The decline of civility in some locations – and most notably the big “wholesale only” shows – was quite disturbing. Vendors in the larger shows were less friendly than in the smaller ones – and the patrons were astoundingly rude – from aggressively shoving fellow patrons out of the way – to facing each other down in games of “show aisle chicken” – to the undulating roll-away-luggage obstacle courses that blockaded some locations as stationary shoppers idly shoved their bags into and out of the aisles, oblivious to the hazard they were inflicting on fellow patrons. 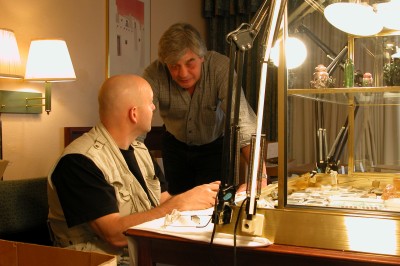 You won’t find warm hospitality like this at the wholesale shows.
This dealer is showing me a nice parcel of Indicolite from Mozambique.

The “wholesale” shows were generally not as pleasant or as fun – nor did they contain the best deals. I assume this is due to the higher overhead that the larger shows charge. I noticed few exceptions to this.

Some show hosts were even less informed this year about business regulations outside their home jurisdiction, and were generally unapologetic about their ignorance. I think there’s a serious need for a central clearinghouse for wholesale credentials – and a need for education about the issues of business credentials for those who are not from Tucson (most of the patrons!)

At least one of the advertised shows on the north end of town was a “no-show” – We drove to the advertised location only to discover no signs, no people, NO SHOW. I didn’t have time to investigate further, but suffice it to say one should take nothing for granted.

When shopping “hotel row” (Pueblo/River Park, La Quinta, Howard Johnson, Rapa River  & Days Inn – I recommend parking at the Convention center and walking or catching a shuttle. The on-site parking can be a real headache. Pueblo appeared to be experimenting with new strategies for parking – causing a traffic hazard on Freeway. I look for this venue to abandon the whole parking nightmare sometime in the future in favor of an off-site park-and-ride service that will probably work better for them – and patrons.

The shows on “hotel row” continued to be reasonable shopping this year, and we renewed connections with some of our favorite vendors.

The Executive Inn has grown, adding some outside vendors, and collecting some new ones of interest, including some more of our old friends.

Smuggler’s Inn was a bit disappointing. Despite their advertisement of “a show in every room”, much of their location was unoccupied, and many of the vendors there said they’ll set-up elsewhere next year. I look for even more new venues to open up next year, as I heard this kind of talk from various vendors in various locations. Competition for the hospitality dollar could be a good thing for vendors and patrons alike.

The Clarion is a good new show, though a bit parking-challenged if they grow much. This location was a bit convoluted to navigate once indoors, but I think it will be higher on my list next time around if they keep the same vendors. Some vendors have migrated from Executive Inn to this location, and it was good to reconnect.

Electric Park has grown even more and this time showed more material, including the best assortment of Oregon Sunstone, both rough and cut that I saw at Tucson this year.

The G&LW show was better this year in terms of interesting me, although they suffered a few organizational issues on the day Holidome opened. They still have perhaps the best parking area / system / service in town, with golf carts circulating constantly to ferry buyers from their large parking area to the show door. 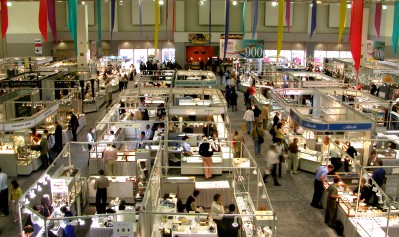 AGTA was as always, the centerpiece, with displays, seminars, and educational as well as jewelry and equipment vendors.

We skipped GLDA again, because time is at such a premium in Tucson, and the inconvenient transportation issues that their new location imposes. In the time it would have taken to go there I visited three other venues. I hope they re-think their location and find something that will better accommodate serious buyers.

GJX appeared to have a smoother check-in this year at the opening, but I didn’t see much of interest beyond a few friends who display there. The only evident rough was way over-priced, and I recognized some individual rough stones that have been offered here for over four years. I think the overhead is a limiting factor, and another year like this one will see GJX removed from my list of “must visit”
venues.

The Radisson was back to hosting a show this year, and it was good to see much of the old GLDA crowd back at this location. This show’s organizers were courteous to AGTA badge-holders – I don’t know how they treated other travelers. This show is a warren to navigate, but it’s amazing the number of vendors they can host.

The Holidome was about the same as usual, though it was a site of some insane behavior by buyers. I did business with a few old friends, and found some good deals on low-end cut gems here, too.

In general, the rough market was rough. Stones I saw were often leftovers from previous years, and I even recognized some specific stones from as long as four years ago. The material offered was generally of lower-grade color, lower-grade clarity, and smaller sizes – and was more expensive. I inquired from some dealers about this issue, and received some interesting information. Below are my remarks about specific materials, with photos of some of my purchases.

If you’re going to shop at Tucson, it’s a good idea to have your gemological ducks in a row. Be careful about the vendors you choose to do business with – Look for someone who is there year after year. Also, bring the tools you need to be confident about your purchase. Or, bring your own expert. I believe that the AGTA show actually has a lab on-site to facilitate transactions.

Many vendors are not expert in the material they are selling, so mislabeling or misidentifications may not be intentional. Some materials are mined in the same location, resulting in mixed parcels. Filters can be of some use for these situations, but few things trump experience. Here are some of the gemological gaffes I saw or suspected this year alone – just the ones I noticed in rapid passing:

Know your financial depth: Have a budget and work from that. Make sure you have enough gas money to get home.

Know your gemological depth: If you can’t even pronounce “Paraiba”, maybe think twice about purchasing the exotic and insanely expensive material.

It also pays to establish relationships with dealers over time. Two of the nicest pieces I acquired on this trip came from a dealer I’ve been working with for many years.

Did I mention politeness? (see last year’s report for a dissertation on this).

City of Tucson and show promoters seem to be doing a great job with security. The police and armed contractor presence is very evident at nearly every venue. They are to be congratulated for their professionalism and their helpfulness.

You are still responsible for you, and I recommend managing both negotiable funds and purchases carefully. Most decent hotels have in-room safes, and safety deposit box rental is cheap insurance.

Be sensible about selecting your accommodations, your travel, and your parking. WALKING IN THE SUNSHINE is part of the fun of the Tucson experience – especially if you’re usually cooped up in an office or snowed-in during January. Walk a little extra and enjoy the freedom – especially if that lets you park in a more secure area. One of our party suffered serious damage to his vehicle this year when someone attempted to steal it overnight…

That’s all for this year – Feel free to write with any questions or suggestions that you may have.
Maybe we’ll see you there next year…