This is our brief review of the Tucson Gem Show 2004 – both the show and our trip to the area. In addition to review information on the show, this page includes consumer warning information (experiences with a few unsavory Tucson show vendors), as well as some information of a tourist nature. Please enjoy anything you find interesting.

The trip was great, as always. We left Oregon with snow on the ground and cloudy skies. Driving south through Nevada and Arizona the weather got prettier the further we traveled, the warm yellow sun washing away our winter blues. 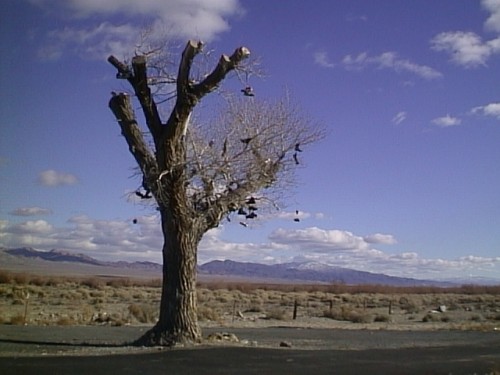 This is a rare “road-side shoe tree” in northern Nevada.

As a professional cutter I don’t often shop for cut goods. However, there were a couple of great opportunities on some natural materials that are usually difficult to locate in rough material.

At GLDA I found some great deals on natural Alexndrite loose stones under one carat – very nice color change and reasonable presentation for native cuts.

At one of the hotel shows I located some nice Columbian Emerald that was very well cut at an unpassable price.

At the Holidome I located some large (10+ carat) Tanzanites that were well-done for native cutting. The price was quite good for this size and quality of goods.

One of the things I saw more of this year was open warfare between dealers of some materials – both rough and finished goods. Some RADICAL price variations were seen as evidence of the fighting. These conditions made for some serious deals for those whose ethics permit “passive” participation in such feuds. Knowing this (up to 400%) variation in prices, it will be very interesting to see where the post-Tucson wholesale guide places prices on some specific goods…

Rough offerings were different than last year. There was generally less material that I found inviting, and what I did see was both lower quality and higher price than last year. Who knows if this is a general trend, or the result of various political and economic factors?

To illustrate the difference from last year, I quanitfy the excitement factor for rough material using a quick-and-dirty “John’s Tucson Rough Index” method. I simply keep a rough running total of the rough I would buy if I had an unlimited budget. Last year’s JTRI score was about $15,000+, while this year’s JTRI was only about $7,500+ – a reduction of 50% comparing similar show attendance dates last year.

The large, sweet Tourmaline rough I found last year was gone this time around. Most of what I saw was smaller and of commercial quality. I only found a single piece to buy this year. If you like Tourmaline I suggest you obtain it sooner rather than later. I’ll guess the price on larger nicer stones is on the way up…

I still found some great material – and some really exciting things I’d been hunting for:

I purchased a nice small parcel of ~1 carat Demantoid garnet rough. Watch this site for some nice 25 to 50 point cut gems in the near future. I think these babies will scream after they’re cut.

Spodumene was a great deal again this year, with large, clean pieces available for good prices. I suppose that’s reason enough to buy it, even though I usually swear at it while polishing! 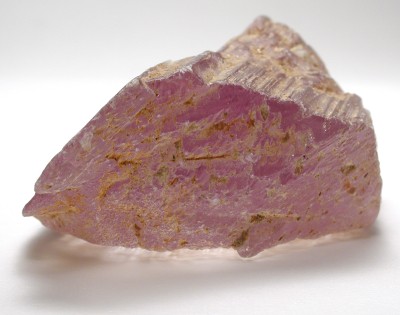 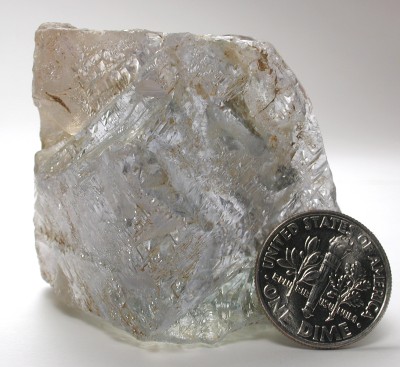 This is a view into the C axis of the rare blue Spodumene from Afghanistan.
This chunk weighs 81 grams and is a crystal point on the other end – practically a preform. 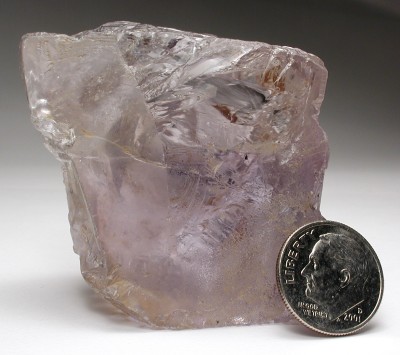 I shopped this very clean 119.2-gram hunk for a client. 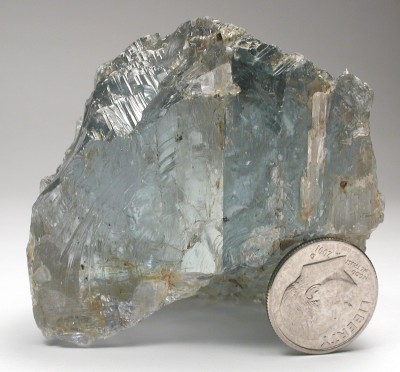 The same client asked me to buy this 139.2-gram piece of the rare blue Afghani material. The cleavage between facet grade and carving grade sections of this stone is clearly visible.

I bought this 32-gram piece of Heliodor on orders from a client. I’m really excited about the finished stone this one will produce. It’s completely clean and HUGE, as the photo shows. I know a few dealers who had large quantities of good-quality, good-color, clean material, and for reasonable prices. 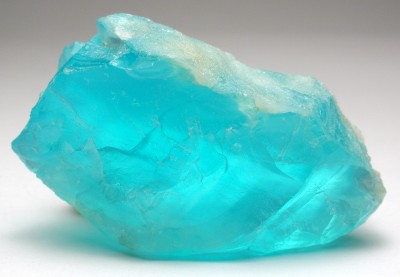 This material caught my eye from a great distance – and transfixed me until I had some in my pocket. I’m very anxious to finish some stones from it. It is facet-clean electric blue Opal from Peru, and it really has THIS color. From across the room I almost thought they had ENORMOUS chunks of Apatite! 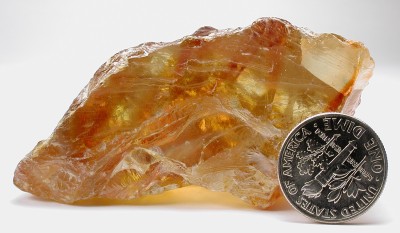 This was a real prize – a “clean” (clean enough) Sphalerite weighing over 100 grams, and well-shaped for yield! I obtained five comparable pieces for myself – and some for a friend. 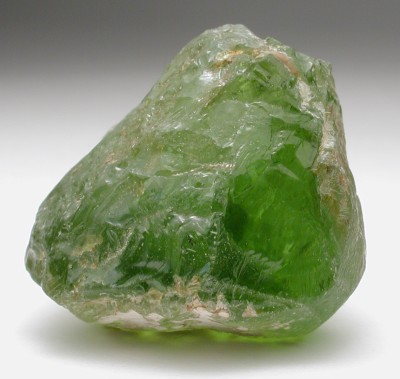 Another trophy from the trip was this HUGE
(15 gram) piece of Peridot from Pakistan. It’s practically a preform!
Peridot is a favorite of mine and I’m really looking
forward to putting this one in the personal collection. 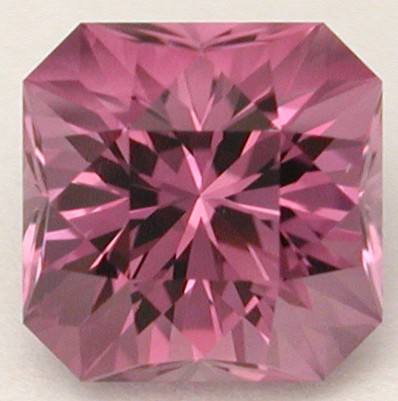 Peridot was the “hot” item I found this year – lots of it available, in large, clean pieces – and for reasonable prices. These two 10+ gram (each) pieces are some other examples of this. If you were willing to cut less-than-eye-clean stones, reasonable Peridot in 4+ gram sizes were available cheap. I also saw some great deals on eye-clean 1-Kg commercial parcels of Peridot. 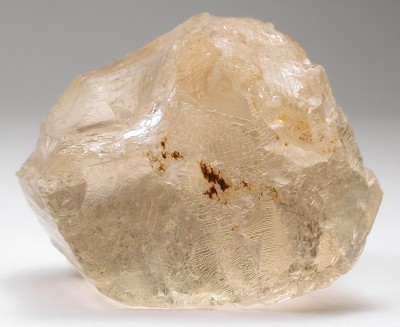 I deal every year with a nice fellow from Mozambique. This year, he was promoting a new find of some beautiful Scapolite. I managed to score this 16-gram piece from him just as the gem magazine guys were arriving for an interview and photographs. Remember that you saw the first mention of this material here – and read the articles in the gem magazines. They are bound to be fascinating. 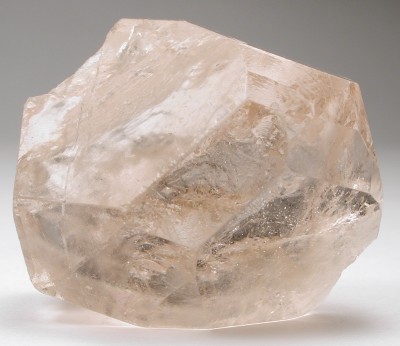 There was lots more light pink Topaz from Pakistan available this year in larger clean sizes – similar to the piece I obtained last year and turned into 901-32. This piece of rough weighs about 30 grams and should produce another collector-sized gem.

I scored this monster clean Imperial Topaz crystal from a dealer at one of the outdoor shows. It has been “windowed” by hand to show how clean it is inside. It weighs 86 grams, and given the shape should easily yield a collector stone weighing over 100 carats. The color is a tad light, but the red flashes are great!

I also found a handful of great included Quartz to do some “needle cuts”: 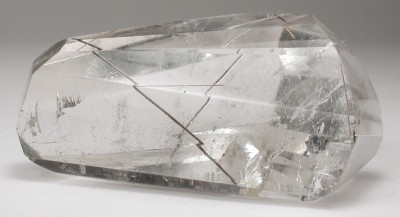 Sometimes, the best source for good, clean needles is inexpensive, previously-worked Rutilated or Tourmalinated Quartz like this one. Unfortunately, the price of needle-included Quartz was up by about 100% and more over last year’s prices.

Sometimes, I get lucky and find a good isolated needle in a chunky crystal.
This one will cut a real beauty of a stone – with a reddish-orange needle in it.

If you have a special interest in any specific items mentioned above, you should contact me ASAP. There are a VERY LIMITED number of these extraordinary pieces. Once they are cut and sold, they will be GONE. And, as you have read above, we don’t know what the market will do next year…

Also, next season I plan to work closely with a larger number of clients as I prowl the back-street shows of Tucson looking for bargains in rough. I’ll be taking authorizations and orders for specific purchases to tap into for clients who want to exercise that kind of buying strategy. I will be able to track a limited number of requests, so if you have a desire along these lines you should let me know NOW to insure your are “in line”.

I did business with several of the same dealers – and made several new contacts with great people. The Tucson show would be worth visiting if only to observe the mix of cultures represented. One must realize that some cultures do NOT dicker or bargain, while others virtually REQUIRE it. Hilarity results when people from these two groups attempt to do business without each considering the culture of the other…

I advise anyone who has not been to Tucson to research these kinds of issues before going – or better yet to travel with someone who knows the ropes – including cultural issues. At the very least you’ll get better deals.

Once again, I must say that as a group, the most friendly, professional, and hospitable people I did business with were from the Middle East – particularly those people from Afghanistan and Pakistan. They coped with stereotypes and abrasive “security” issues with aplomb. When I asked one man if he had some tweezers to aid in sorting tiny stones, he smiled with humor and replied:

“I am from Pakistan, and they prefer for us not to have sharp, pointy objects on the airplane.”

This year I also had my first experience with a dealer blatantly trying to steal from me – a fellow from Columbia tried to pull a quick-change trick. He tried to distract me and then to deny that I’d paid him $200 a few moments before. He was prepared to argue with me to complete the theft, but when my wife pointed to where he’d secreted the money he was embarrassed and showed an obviously guilty face. Remember to watch your wallet – and to complete one transaction before looking at other material.

I also saw many examples of the old colored-string trick on the bead racks. I looked briefly at some beautiful strands of small “red Tourmaline” beads. They were so clean and clear that they could have been faceted stones rather than beads. As I looked closer, I understood why this particular material (Tourmaline – or maybe QUARTZ) was marketed this way. The beads themselves were practically colorless – Their rounded surface was magnifying the RED THREAD they had been strung on – giving the appearance of intensely red beads. Obviously, NO SALE, there.

Last in the “shyster” department was the Smuggler’s Inn hotel where we stayed. Staying here was necessary because we made reservations at the last minute, and it was “AFFORDABLE”. One gets what one pays for!

Management was surprised that we wanted a lock on the sliding door on the 2nd floor balcony – and the maintenance guy literally laughed out loud when we asked why there were no chain or other privacy locks on the entrance door. Management here tried to lie to me about the “Gem Shows just now starting” (on Feb 14 he claimed) and gouge me for extra nights I wanted. This establishment is obviously not recommended…

There are some great side-trips available in the Tucson area, including the Arizona Sonora Desert Museum just a scenic half-hour drive outside Tucson. This half-day side trip is highly recommended. 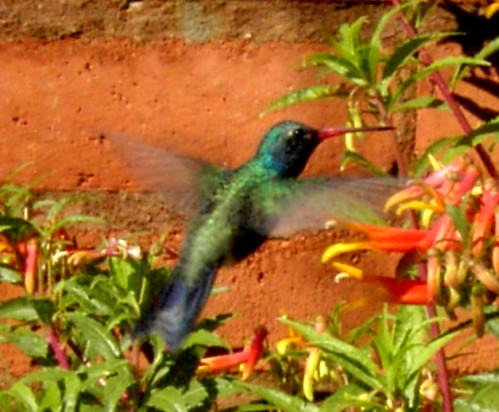 Trish photographed this hummingbird in flight at the Sonora Museum. 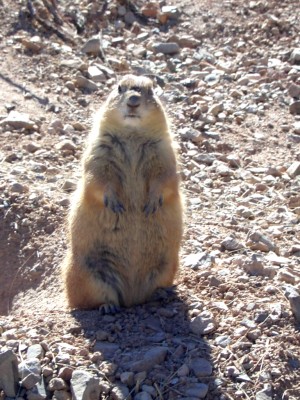 …and this prairie dog at one of their exhibits.

We also found the Titan II Missile Museum to be fascinating. Next time you’re in Tucson, check it out. 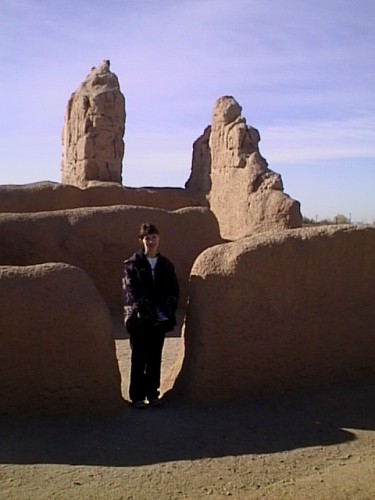 We visited these Pueblo ruins along the road between
Tucson and Chandler on our way home. 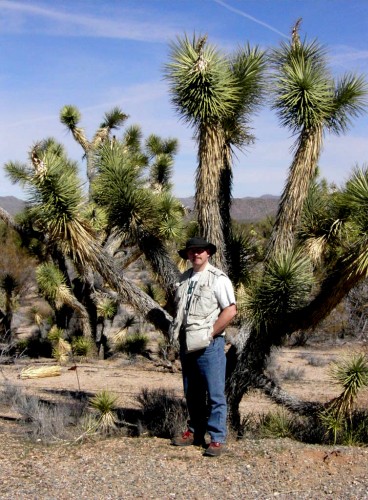