This was a beautiful year for fee digging Oregon. We had great success fee-digging at the Dust Devil Sunstone mine and at the Juniper Ridge Fire Opal mine – both in Southern Oregon. Following are some photos and highlights of the season.

The Juniper Ridge Fire Opal Mine:

The Juniper Ridge Opal mine sits atop a juniper freckled basalt ridge
in the Southern Oregon hills between Klamath Falls and Lakeview. 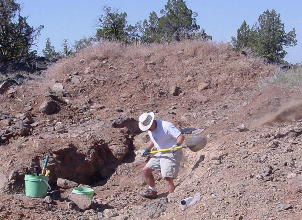 Even under the August sun, a constant breeze floating over the ridge
keeps you cool while cleaning out the pit. 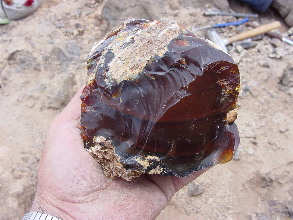 This is just one of several fist-sized pieces of
dark red that came out that day. 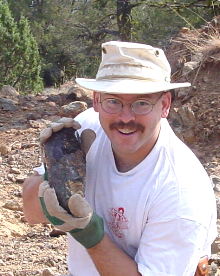 Here, I’m one happy miner – holding up a 4.5 POUND trophy of red
fire opal – my reward for a few hours work releasing it from the basalt. 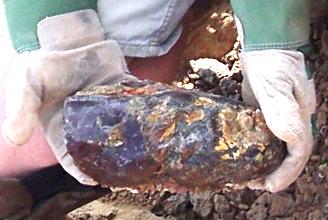 Here’s another view of my 4.5 pounder. This monster is very dark, so
will have to be cut down into smaller faceted stones and cabochons. 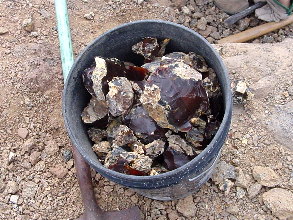 A day of hard digging can be very rewarding. I released this entire
five gallon bucket of opal in one day. It includes several fist-sized
pieces as well as the 4.5 pound trophy. 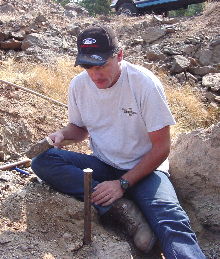 Good mining means good company. Here, Chuck Newnham,
one of the Mine partners, is just as busy as I was that day. 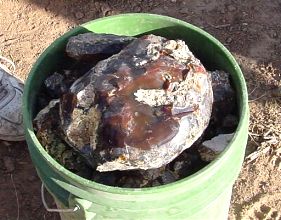 Here’s the take from another fee-digger at the mine – Another five
gallon bucket full, including an EIGHT POUND “egg” of red opal! 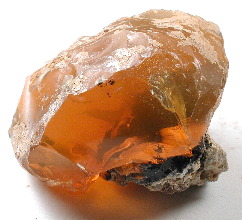 The material from this mine shows wonderful colors. Here’s one of my
facet-grade pieces showing a nice reddish orange. This chunk is about
120 carats. 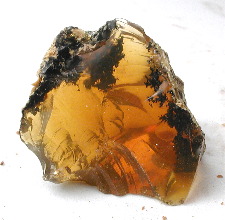 Another nice orange piece – This one shows some dendrites around the
edges. It weighs about 40 carats. 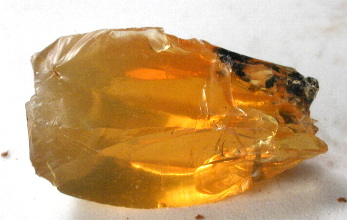 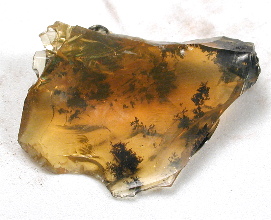 This piece looks lighter because it is thinner. It shows nice
dendrites, and will make a very pretty cab.

The Dust Devil Sunstone Mine rests in the open high desert North of Plush, Oregon, in an area known as Rabbit Basin. The weather is usually beautiful throughout the Summer mining season and the clean, dry air smells of the sage that surrounds the mine. 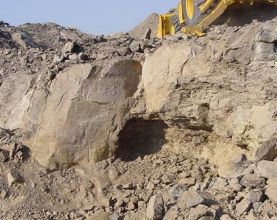 The most interesting and productive discovery I made this year was a lava tube filled with good matrix and basalt nodules. The pipe yielded nearly a kilo of schiller and red sunstone per cubic yard of matrix. I worked it over two long weekends, producing nearly twelve pounds of sunstone, about 18% of which contained color.

The above photo looks into the last few feet of the played-out tube, the west wall of which can be seen running along the base of the bank to the right of the hole. 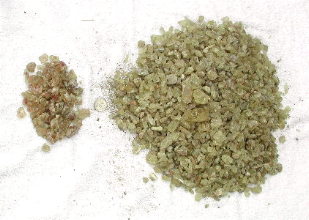 This photo shows the six pounds of gem rough that came from the pipe on the first weekend. Note the quarter between the piles for scale. 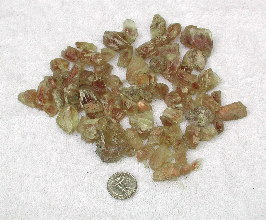 Here’s a closeup of the high grade from that weekend.

Always roll them over! This pair of photos shows a golfball-sized piece of Sunstone with an opaque skin on one side – and bright red schiller showing on the other! 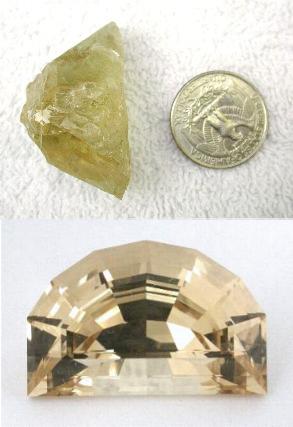 What’s a season of mining without a trophy? This piece weighed 145 carats rough, and now weighs 37.40 carats cut. It’s clear champagne color, with a touch of silver schiller cut in a freeform step design.